Enjoying the familiar sights and seeing old friends back in D.C. One thing I always miss out in S.F. is the multitude of *free* museums that Washington has to offer. One particular item I've wanted to see for a while is up in the Smithsonian's American History Museum: 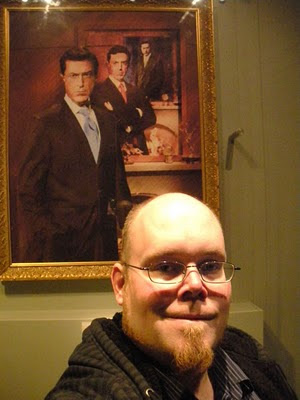 Yes. The "painting within a painting within in a painting" of one Dr. Stephen T. Colbert, D.F.A. that once hung over his TV show "fireplace." I was psyched that a phony painting of a phony pundit would actually make it into the Smithsonian, especially since he's one of my favorite humorists. (The "painting" was actually created via digitally photo alteration - I was hoping for at least acrylic.)

Aside from that, there were lots of other new exhibits that I'd been looking forward to, including a big section on the history of various forms of transportation and highways/railways, and a coin and bill exhibit that included an actual $100,000 bill. I suppose before reliable wire transfers, you had to shuffle your promised "gold" around one way or another. Oddly enough, in the transport exhibit I learned a lot about the history of the Port of Oakland and its transition from longshoremen to containerization.

Anyhow, I love D.C. and miss my friends here, but after a couple of weeks I'm looking forward to getting back home (though not to the rain.)
Posted by Kevin Wood at 10:25 PM No comments: