Well, the APE convention is over for 2009, and I have to say it was an exhilarating new experience for me, selling my creations in a large convention hall for the first time! It was great, as always to see work from all the other artists, and I purchased quite a few items, but the the first time, I also got to trade art for other art and comics, which was a lot of fun.
A lot of why I chose to enter the convention was to just get my stuff out in front of a wider audience. Sharing it with other artists whose work I admire was a great new avenue for that. The web is great for allowing almost anyone to access my art, but if only certain groups of people are already aware of you, there are only going to be so many new people to stumble onto you. APE was a great experience, not just because I got to sell some of new latest creations to people who really seemed to like it, but because I was part of a larger community of artists, from the Bay Area and beyond, in a way I never quite was before. I'm looking forward to Wondercon, though I will probably tick to being just a visitor to Comic Con for now. That convention is pretty damn huge and intense! besides, it will give me a chance to wander without having to mind my booth!
Thanks again to Daria, Gerald, and Olivia, who shared the table with me. They all had great creations as well, and it was fun to start off with other great artists who were new to APE. Looking forward to next year!
Posted by Kevin Wood at 12:53 AM 1 comment:

The big debut is soon!

I'm feeling a rush as I approach the date of the 2009 APE Con in San Francisco. This will be my first time exhibiting and selling at any of the comic/art conventions, and I am really looking forward to the experience. I've got several never-before-seen artworks that I will debut there, and on my web site almost simultaneously, and I am ramping up production of several projects in order to have an even bigger set at WonderCon in 2010, which I plan to exhibit at for the first time as well.

I may leak a couple of previews on here in the coming days, so keep an eye on this blog, because it's going to get a lot more lively around here!
Posted by Kevin Wood at 11:16 AM No comments:

Lots still to do to prepare for my first sales booth at APE Con. It's still about a month and a half away, but seeing as this is my initial foray into "retailing," albeit just for a two-day event, I am still readying myself and trying to find out the "unknown Unknowns" since I think I have already covered he "known Unknowns" by now...
Not really ready to go to sleep, though that would probably be wise at this point in the evening/morning. Too many idea are racing through my head, while I am still working to make concrete the ones that came before them. New printer on the way, to help make them manifest. A lot of people who have done prints for sale at other events have recommended the Epson R1800, which is discontinued, so I went for it's descendent, the R1900. Hope all goes well, as the low-end Epsons could sometimes be fussy, I hear the higher-end ones are more reliable and deliver even better results. I think I have lined up a T-shirt printer, and I have about half of the shirts I want to offer already laid out in Illustrator. Now I just have to wrap up the others...
Anyway, enough thinking aloud...time for bed.
Posted by Kevin Wood at 1:20 AM No comments:

All the Sturm and Drang is over, and the Futrama Crisis of '09 that I was only recently made aware of is over! Fox and the voice actors have worked out their contract dispute, and Futurama's revival will go forward with the One True Cast. Frankly, I think Fox "acted stupidly" by even taking their game of chicken that far. If the execs knew what made Futurama popular, and therefore, a financial success by any measure, they would known that having the original actors is critical to any revival. I can understand not wanting to give the farm away, the actors on the Simpsons have managed up re-up to some pretty nice per-show rates, and I'm sure Futurama's budget isn't going to be anywhere near the current Simpsons budget. Still, if Fox had followed through and used new actors for the show, many, MANY of the existing fans would have not watched, other than perhaps a brief peek at an episode or two before turning away in disgust. The reason the DVD movies made money is because Futurama has a big following, somewhere between a large cult following and a moderate mainstream following. And the time and money were taken to make sure the movies were made right. My only complaint about them is that having to structure them in such as way as to be ready to be parsed into individual episodes for repeats on Comedy Central made some of them a little awkward. In any event, if Fox was were willing to let the X-Files run into the ground just to keep a marginal cult audience, they should have been more than willing to invest in the right talent to make sure the show stays true to itself and keeps existing fans as well as attracting new ones.

Now that things seem to be back on track, albeit with some unfortunate cuts to the writing and production staff, hopefully the new, somewhat slimmed-down Futurama will be as good as the original. It's up to all of us who love the esoteric humor and witty banter of Futurama to support it when it finally returns. If we're lucky, maybe this show can live on longer in its second run than it did in its first one...
Posted by Kevin Wood at 9:58 AM No comments: 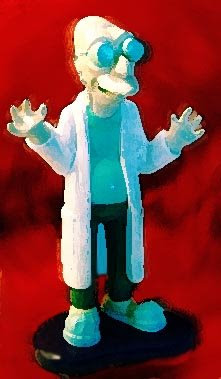